Source: A Second Shot at a First Impression? ! Part 1 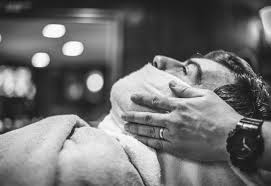 Recently I was searching online for a men’s grooming place. I normally just go for a haircut to the person who’s been cutting my hair for about 2 years now.  As for my face, whether I’m growing a full beard, a goatee, or clean shaven, I always do it myself. Only once, many years ago, when I lived in St. Louis, did I go and get a shave.  You know at one of those old school barber shops.  Ten bucks gets you the works, hot towel, neck massage, warm hand-whipped shaving cream, straight razor shave.  I only went once, but I remember the experience well. And I remember that I felt great afterwards.

So, around the holidays, as I started growing my beard out and I started feeling like I was looking scraggily, I thought, I want to find a men’s grooming shop here and try it out.  Much to my surprise, for the size Las Vegas is, there are really only a handful of such locations around the city. I found one, called Fino for Men, checked out their website and decided that I’d give it a shot. 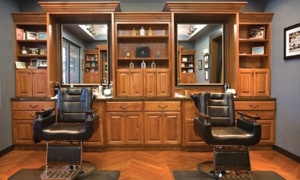 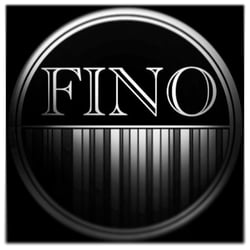 I called to schedule an appointment but they were closed on Mondays.  So I went back on their website and left a text message that I was hoping to come in on Tuesday sometime.  I presumed that if there is a place on the website that says,   ‘Send us a message’ that someone would come in Tuesday morning and read and respond to said messages.  Tuesday came and I received no reply.  I waited until after lunch and finally called to make an appointment.

The young woman who answered the phone seemed to be unaware of how their online messaging system worked, who the messages went to and when or if they respond to them.  That was slightly frustrating.  She scheduled my appointment for later that day. So, even though, I was awaiting a message that never came, I was still happy that they were able to see me that day. Yahoo!  I’m going in for my beard trim and maintenance.  That’s what the website called it.  I had visions of a relaxing time, a perfectly groomed beard and a great customer experience. 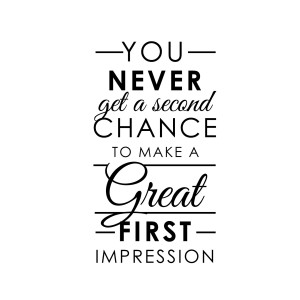 When I arrived, I was greeted in a friendly manner by the receptionist, I was offered a drink. They said they had wine, I accepted a glass.  It was not to my liking, but it was nice that they had it available.  The gentleman who was my barber, (I’ll call him Jason) came out to greet me, also very friendly, helped me with taking my jacket off and hung it up for me.  I was thinking, I’m really going to like this place. We walked to the back, I was seated and I told him I was there for the Beard Maintenance & Trim. Now, since it was my first time there, it would be helpful for the barber to find out exactly what I, the customer- was wanting/expecting.  Maybe I said the wrong thing.  I don’t know.  All I know is this is what transpired.  Jason was very friendly, said he’d owned a shop for years in another state before moving to Las Vegas. Cool, I figured this guy is a pro, knows what he’s doing.  He took out the electric trimmer and began trimming my beard.  Next he took out a straight razor and trimmed the edges.  We had a good conversation. He was a very nice guy.  All the while, I kept thinking to myself, is this it? 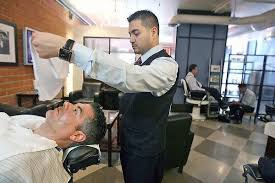 He kept saying to me, “If you’re happy, I’m happy.”  So apparently, he cares if his customers are happy.  When he was finished, he brought out the mirror and asked how it looked.  I said it looked good. He replied, “Okay, if you’re happy, I’m happy.”  I paid and left.  AS I was driving home, I wondered, “where was the hot towel, the foaming shave cream, the menthol aftershave, the reclining chair, the neck massage?”  The website states ‘Beard Conditioning’.

I liked the way my beard was neatly & perfectly shaped.  So he did a good job at the task but that was not the only reason I went to Fino for Men.  I was hoping for a great customer experience from a place that calls itself a “grooming lounge”.  On my drive home, I kept thinking about how Fino did not do much to win me as a new customer.  The more I thought about it, the more it burned.  Not just in my mind, but on my face.   That’s right,  I was feeling irritation on the sides of my face.  I focused my thoughts on something more positive and drove home.  As I walked in the door, I asked my wife, how my shave looked and she said, “What happened to your face?”

I thought that is not a great way to greet me.  She took a close look at my face and sure enough, I had razor burn.  The sides of my face were red and irritated.  She immediately took pictures.  She did admit that the shave was done well. I then told her that I was utterly surprised that no lubricant or shave cream was put on my face prior to using  the straight razor on it.  No aftershave lotion was put on after. Nothing.  But he sure did a good job on the trim.

Most of the time customers that have a less than satisfying experience will just not return to that place of business.  Others will write a negative review on Yelp or some other review site.  I considered doing both but instead I chose to call the place and share my complaint. I talked with the receptionist and she assured me that she would have someone call me back. 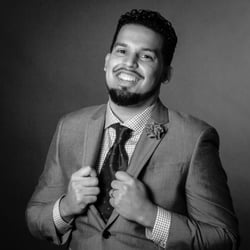 Within a short while, the owner, Juan did call me and he listened as I stated my case and shared my less than great experience.  He thanked me for the input and stated that if customers don’t give them feedback then they have no way of knowing how well they are or aren’t doing.  He was apologetic and invited me to return and he assured me that my next experience would be what I originally expected.  He invited me to come back in then, but of course since my beard had just been trimmed, I did not have need of a trim again, yet. I appreciated his response as he seemed genuinely sincere.    I said I would take him up on his offer at a later date.  Which I did do some weeks later and the experience was as I described in Part 2, of this post which I posted first. See below:

How are you tracking your customers’ satisfaction or dissatisfaction with your company’s product or service?

Is your Team efficient at accomplishing the task but not at providing an amazing customer experience?

What are you doing to ensure/provide proper ongoing training for all of your Team Members?

How are you encouraging your customers to share their feedback?

What system do you have in place to follow up with and communicate to your customers that you value not only their business but them as people as well?

As I mentioned in Part 2 of this post, Juan did win me back, because I initiated the call, he listened to my feedback and invited me back in. On that second visit I received the service I was originally expecting.  I do recommend Fino for Men. But if I had not called and voiced my thoughts to Juan and he was not open to listening to his clients this may have become a negative review on Yelp rather than a Soupfly post recommending them. For more information: http://finoformen.com/

If you do go to Fino in Las Vegas, tell Juan that Christoff from Soupfly sent you!

Thank you for Reading! I am very grateful for all my Soupfly Readers from around the world!  If you enjoyed this post, please like and share. Also, we invite and welcome your comments.

Source: A Second Shot at a First Impression?! Part 2

As I sat there reclined in the barber chair, I felt so relaxed.  Danny, the barber, took a hot towel out of the steamer, shook it for a second to cool it a bit and then wrapped my face with it. “Hot towel.  To open the pores” he said.  It felt very soothing on my skin.  This was what I had been waiting for.  Amazing how something so simple could have such a positive affect.  After the hot towel, he put shaving cream on the edges of my beard and face where he would then use a straight razor to neatly outline the edges.   After the shave, a few dabs of witch hazel, ‘to close the pores’.  Now I was feeling refreshed, invigorated, and when he handed me the mirror-well, I took one look and thought, “I look good”. This time I was glad that I had discovered Fino for Men in Las Vegas.

Danny was a very friendly, warm and engaging young man.  We had great conversation while he was cutting my hair.  He really seemed to take great pride in his work.  He also checked with me multiple times whether the shortness was the way I wanted my hair and made adjustments when I requested it.  His attitude and mindset was one of truly wanting to please his customers.

While we were talking, I mentioned to him that my first visit was overall not a great experience.    But I gave them a second chance to make a first impression on me.  Very rarely does that  ever happen.

It is commonly stated that, “You only get one chance to make a first impression.”  Customer Service starts with the first interaction between the business and the individual.  This may be when someone calls your place of business, when they step foot inside your establishment or even when they look the business up on Yelp to read reviews.  First impressions are formed all the time by the prospective customers from a variety of sources.   Fair or unfair, this is reality.  Therefore it behooves business owners to do all that is in their power to positively influence that first impression.

What are you doing in your place of business to ensure that each and every customer has a positive first impression and a pleasant experience with your business?  How are you tracking the feedback of your customers?  Do you have a program in place that encourages them to leave reviews, whether on Yelp or other sites?  What percentage of customers don’t share their feedback of their negative experiences and instead just decide to not return?

Are you providing adequate training for your team, your staff to create positive first impressions for your clientele?  Do you have standards and steps of Service in place for everyone on your team to follow?

I will share with you in the next post what happened during my first visit at Fino for Men.

Thank you for Reading! I appreciate all my Soupfly Readers from all over the world.

If you enjoyed this post, please like and share.  We would love to read your comments. How are you managing expectations and creating great first impressions in your place of business?

My Tweets
Join 8,154 other subscribers
My Tweets
Loading Comments...